"A Window to the Depths" 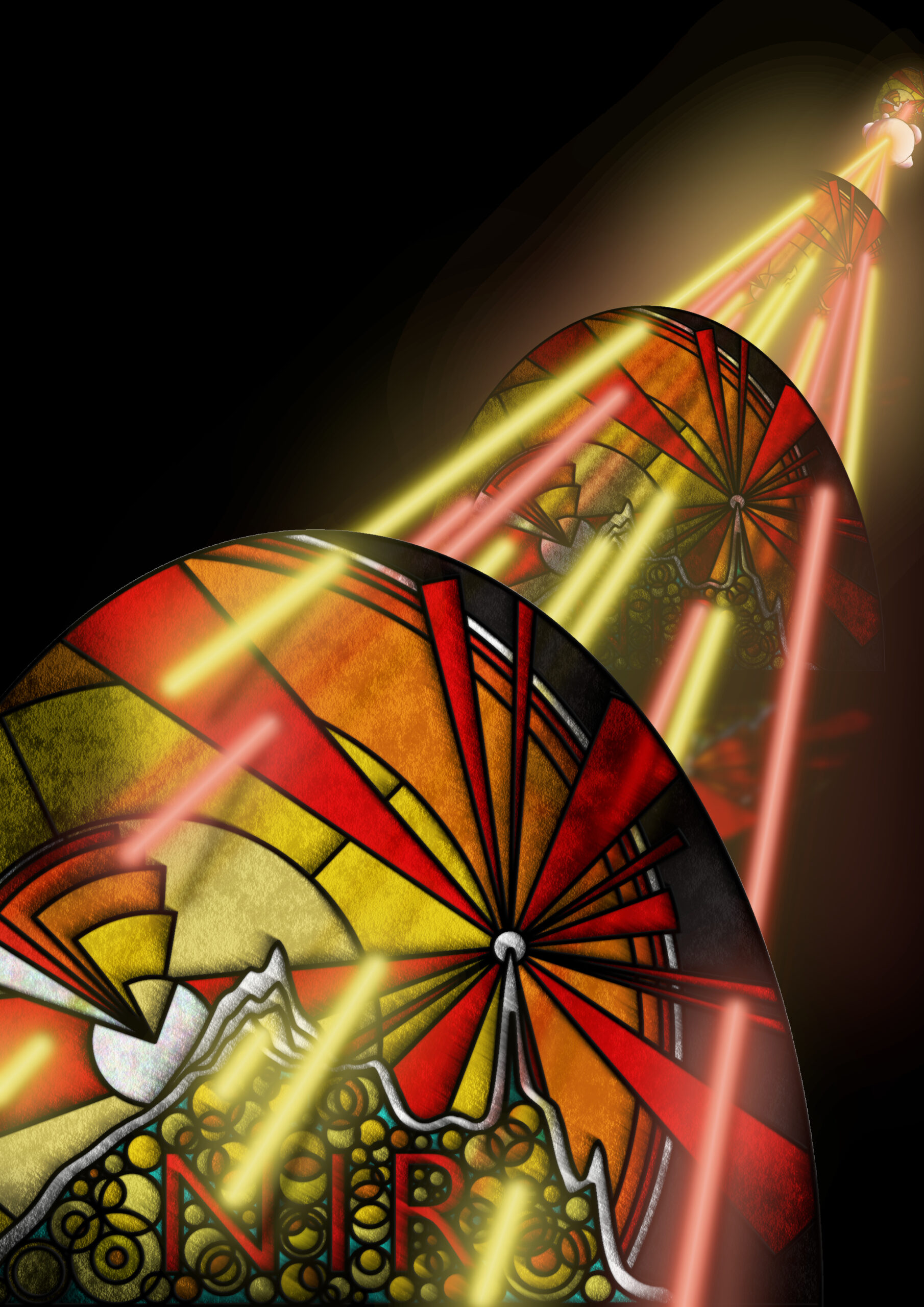 The near infra-red (NIR) optical windows are the wavelength ranges in which light penetrates deepest into the body. This is to say that our bodies are most transparent to red light a little beyond the visible spectrum. This is because the molecules that make up our tissues and life-fluids scatter and absorb less light at these wavelengths than for any other non-ionising radiation, so individual photons of NIR light can travel longer distances between molecules inside the body. Low powered NIR laser light can be used as a tool to see deep inside the body without piercing the skin or causing tissue damage.

A very small percentage of laser light experiences a slight, measurable wavelength change when scattered by a vibrating molecule; this is known as Raman scattering. Biological materials consist a collection of specific vibrating molecules that produce a distinct pattern of wavelength shifts unique to that biomaterial. This is like a chemical fingerprint and can be used to accurately identify the material.

A complication of measuring biological tissue deep inside the body in this way, is the myriad biomaterials contained in the intermediate space between internal target and external detector. These scatter and absorb the narrow spectrum of Raman scattered light by varied, wavelength-dependent amounts. The pattern of light wavelengths that reach the external detector, is therefore not the same as that measured directly at the target. This confuses the data and leads to possible misidentification of the internal biological tissue target.

The artwork shows this wavelength-dependent variance in the transmission of Raman scattered light from-depth out of the body, resulting in non-chemical changes in the externally detected signal. The journal article describes a method developed to accurately correct for this effect.

In the background of the piece, a near infra-red laser beam is Raman scattered by a dense lump of cancer cells. 12 beams of light spread out from the tumour (6 red & 6 yellow; representing the spread of wavelength shifts contained in the scattered light), all travelling towards the foreground, passing through 3 stained-glass windows that differentially absorb the colour beams – 5 of the yellow beams reach you, the observer, but only 2 red beams successfully travel to this point.

The stained-glass windows are intended as a visual metaphor for the near infra-red optical window discussed above (hence the letters NIR on each pane). Choosing to layer the windows is representative of the depth and distance travelled by the Raman scattered light from the internal cancer to the surface of the skin, with increased absorbance potential at each stage.

The stained-glass contains depictions of light scattering (sunbeam pattern on the right), electronic and vibrational energy levels (concentric circles & enclosed triangles centred on the left), and the Raman spectra of lard, the sample studied in the journal article (undulating white line). The 880 cm-1 peak changes intensity whilst 1068 cm-1 remains fixed, reflecting the variable absorption of the Raman scattered wavelengths. Finally, overlapping golden orbs representing photons of light, fill the integral space beneath the spectra; the spectra being a count of the number of discrete Raman photons captured by the CCD camera detector. 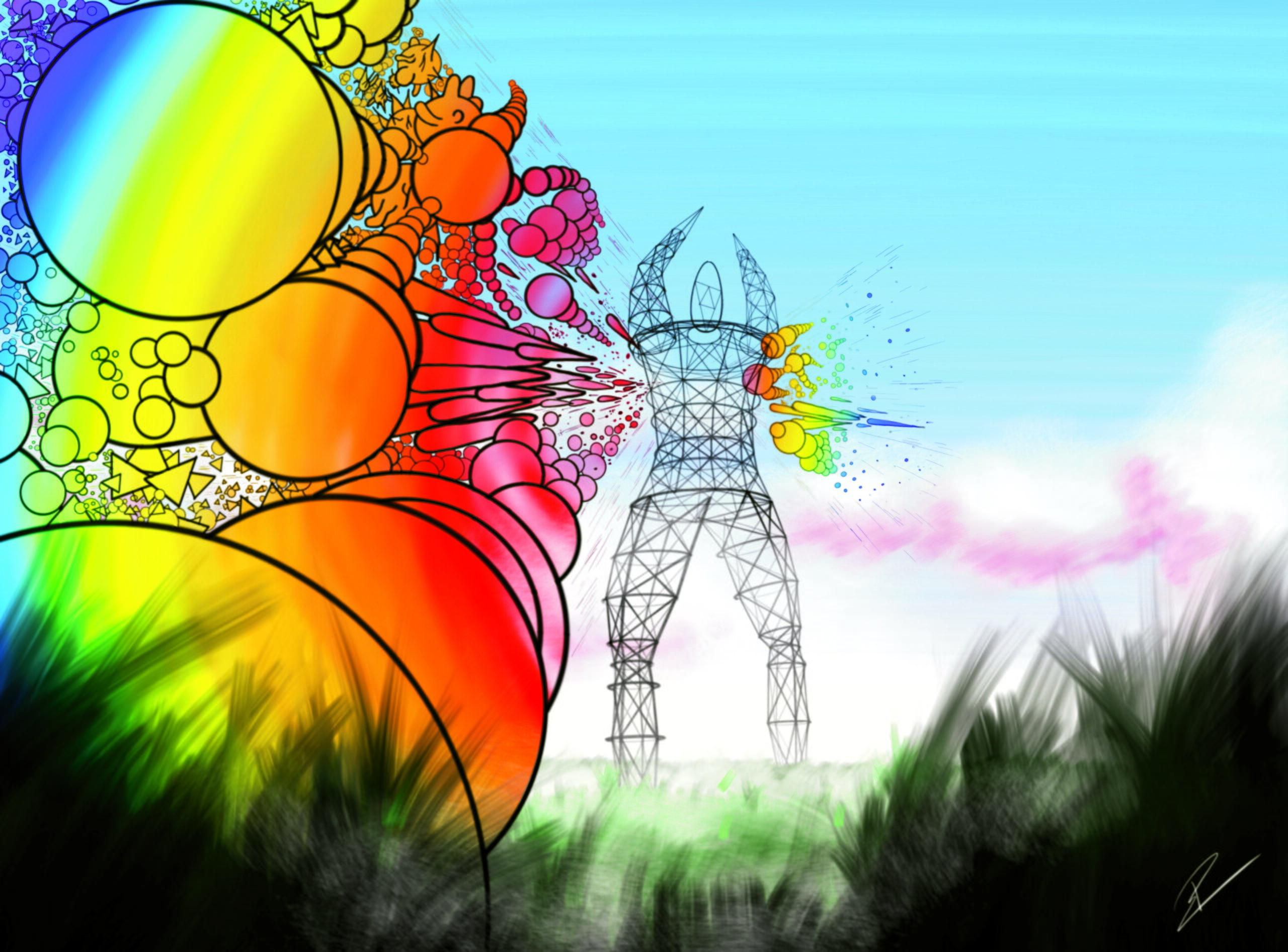 The artwork features an antenna mast in the form of a human body – standing strong, arms raised skyward – with a cacophony of rainbow-coloured nanoparticle shapes creating the signal wave that broadcasts out across an open landscape.

The human body is the aerial from which the diagnostic signal radiates. A signal that is made strong enough to be detected non-invasively from outside of the body (without the aid of surgical probes), by inclusion of nanoparticles at potential disease sites deep within.

To symbolise this signal boosting power, the information waves being transmitted out of the body, dominating the surrounding landscape, are shown composed of all the nanoparticle shapes discussed in the paper (tentacles, rods, pyramids, prisms, stars, spheres, shells, rasberries, branches & chains).

In reality, the signals are a scattered spectrum of invisible (near infra-red; NIR) light wavelengths – represented by the rainbow colours – containing information on the type, location and size of potential tumour targets. This is all encoded in the relative intensities of specific wavelengths within the scattered light.